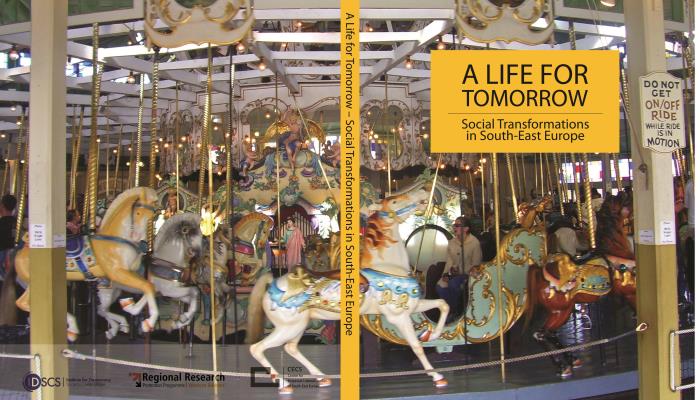 The Institute for Democracy “Societas Civilis” – Skopje (IDSCS) published a new book called “A Life for Tomorrow – Social Transformations in South-East Europe”. This book represents a collection of 11 papers from 17 authors. The book studies the social life in the countries of South-East Europe which has come about as a result of the most recent merging of formal institutions created in the process of neo-liberal and European transition and of informal institutions shaped in part by cultural tradition, in part by experiences from the socialist period. The book editors are Predrag Cvetichanin, Ilina Mangova and Nenad Markovikj.

The papers in the book share a diverse approach to the study of transition processes and carefully research the phenomena which characterize the quotidien of Southeast European societies.

The authors represented in this volume come from a wide variety of different disciplines (political scientists, sociologists, economists, anthropologists, philosophers) and apply the most varied methodological approaches and research techniques.

This volume, as we see it, is made up of four informal wholes. The first group of papers, “Who Likes this Change? Percepetion and Evaluation of Socio-Economic Changes in Western Balkan Societies“ by Predrag Cvetičanin, Misha Popovikj and Jasmina Nedeljković, “Civic and Political Activism in the Western Balkan Societies“ by Ilina Mangova and Misha Popovikj and “Beyond the Incomplete: Dynamics of Social Change in Kosovo“ by Vjolca Krasniqi, is directly based on the results of the research project “Resistance to Socio-Economic Changes in Western Balkan Societies. Testing Two Theories of Social Development” and is geared to the study of the attitudes of the citizens of the Western Balkans toward transition changes and the changes to their practices under new social conditions.

The second whole includes the papers “The Inability to Change: Dogmatic Aspects of Political Ideology in the Macedonian Context“ by Nenad Markovikj, “Transition in the Balkans – Struggles of Homo Balkanicus and Homo Politicus“ by Irena Rajchinovska-Pandeva and “G. W. F. Hegel on Dayton accords or State (that of Dayton) of Bosnia between positive and natural right“ by Džemal Sokolović, deals at various levels, with the (in)ability of the societies of Southeast Europe to change and the resulting dangers which this poses to their future.

The third part of the book focuses on the position of women in transition processes in the socieites in the region. The paper “The determinants of gender differences in responses to unemployment in post-transition countries: the case of Macedonia“ by Dimitar Nikoloski and Nick Adnett analizes the trends in unemployment of women in the countries of the region and the strategies they employ to cope with it. The other paper, “Retraditionalization or Reflexive Modernity: A Sociological Explanation of Fertility Trends in Mature Transitional Croatia“ by Inga Tomić-Koludrović, Mirko Petrić, Željka Zdravković is an attempt to explain the specific fertility trends in Croatia by linking them to a mixture of the socialist heritage regarding work practices, increasing self-expression values among young and educated women, and continued existence in Croatia of the pre-austerity welfare state mechanisms related to maternity leave.

Finally, the fourth, and in many ways central, part of this volume, deals with the issues of informal pratices and institutions of Southeast Europe. The paper by Klavs Sedlenieks “Buffer culture in Montenegro: bratstvo, kumstvo and other kin-related structures“ traces the overarching presence of informal kin-related structures in Montenigrin society. In their paper “The Importance of Clientelism and Informal Practices for Employment Among Political Party Members After the 2000 in Serbia“, Dragan Stanojević and Dragana Stokanić explore the specific role which political parties play in the job market in Serbia, while Borjan Gjuzelov, in the paper “The Role of Informal Connections in Macedonian Society: Social Capital or Corruption?“, questions the forms which informal conections take in Macedonian society.

Most of the papers in this book were presented at the international conference held in Skopje, Macedonia in on 7 and 8 July 2013, organized by the Institute for Democracy “Societas Civilis“ and the Department of Political Studies of the Iustinianus Primus Faculty of Law, Sts “Cyril and Methodius” University. The conference was a part of the project “Resistance to Socio-Economic Changes in Western Balkan Societies. Testing Two Theories of Social Development”, carried out by the Centre for Empirical Cultural Studies of South-East Europe (Serbia), Institute for Democracy “Societas Civilis” Skopje (Macedonia), Social Research Kosova (Kosovo) and Centre for Social Research “Analitika”(Bosnia-Herzegovina). This project was implemented in 2012-2013 within the framework of the Regional Research Promotion Programme in the Western Balkans (RRPP), run by the University of Fribourg upon a mandate of the Swiss Agency for Development and Cooperation, SDC, Federal Department of Foreign Affairs. Following the conference, an open call for papers was put out to other authors who study the social, political, economic, legal, cultural, religious, demographic, educational, and media changes in the societies of Southeast Europe in the transition period.