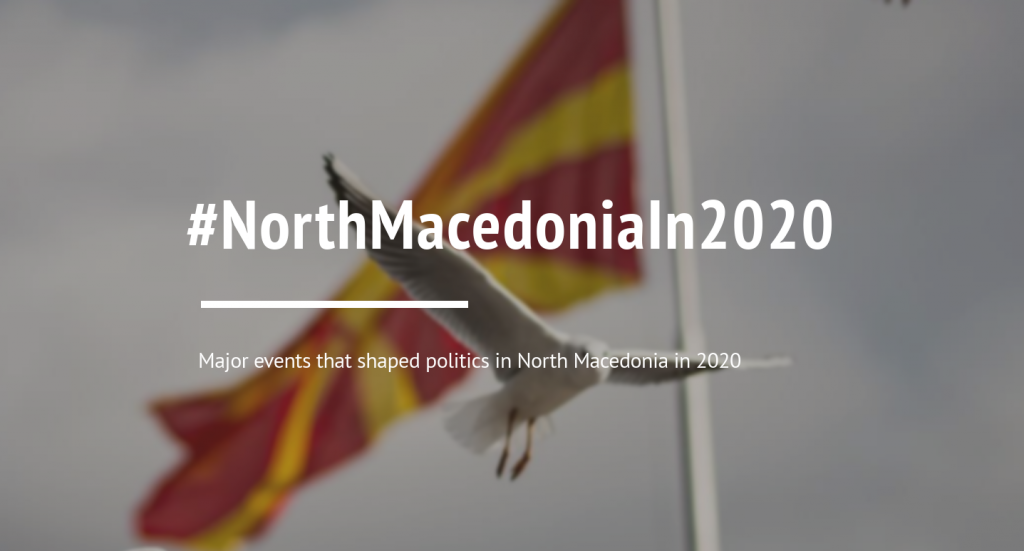 In this short text, the Institute for Democracy gives an overview and analysis of the main political events in North Macedonia in 2020, as well as a short glimpse of what we expect from 2021.

The year 2020 was quite memorable for North Macedonia. It started with preparations for early parliamentary elections due to the French veto for the start of EU negotiations and ended with a new veto, but this time from Bulgaria. In the meantime, the preparations for elections were interrupted by the Covid-19 pandemic, which left the country without a functional Parliament for more than five months, signaling a major setback in the oversight over the executive. A new government was finally formed by the end of August, after July elections and weeks of negotiations between political parties. We summarized the major developments that shaped politics in North Macedonia in 2020, in the following text.

The key takeaway from the pandemic of 2020 is that it presents a condensed overview of the major governance deficiencies. Strategic planning and preparation had been neglected so the healthcare sector had to frequently rely on day-to-day decisions instead of planned scenarios. Similarly, economic aid measures were dependent on lobbying by interest groups instead of modelling and analytics. This puts in question the integrity of part of the measures and their efficiency and effectiveness in alleviating the economy.

Deficiencies in the enforcement of rules were a prominent theme of the pandemic. Regardless of whether the source was corruption or lack of capacity, the majority of institutions did not manage to operate independently of political conjecture, like the elections, public relations of the government, or linkages of culprits with political or business power. This was the case in both pandemics related rules and standard areas of work in policing and inspections.

The new composition of the incumbent government coalition continued with the practice of spoils and patronage, appointing party loyalists at senior service levels.

However, judicial independence and impartiality remained the central governance issue in 2020. The former special prosecutor Katica Janeva was sentenced for abuse of office, for offering to help a person under her indictment to avoid full responsibility. The swift resolution of the case, in comparison to protracted trials against notable political figures or businessmen, increased the doubts about the integrity of the judiciary. At the end of 2020, the Ministry of Justice and the Judicial and Prosecutorial council defined a methodology for auditing the work of the judiciary – a modest step in bringing independence and quality.

In continuation of the informal “tradition” of the country, once again the government planned early parliamentary elections. Elections came after the country was not able to open its negotiation talks with the EU, due to the French veto and shaky trust in the government of Zoran Zaev, whose platform was mainly based on the country’s uninterrupted EU path. The Parliament dissolved in February 2020, scheduling elections for April.

However, election plans would be interrupted by the Covid-19 pandemic, with North Macedonia having its first coronavirus case in February. The new situation evoked a major health crisis for the country, which was lacking in a medical and technical capacity. In an attempt to better handle the health crisis, a state of emergency was declared by the president, however, with a dissolved Parliament, there were growing concerns about the possible deterioration of democratic processes and human rights.

Although there were efforts from some MPs to return to the Parliament, there was no previously established practice or political consent for such a thing, leaving the country without proper check and balances. Elections were finally scheduled and held in July, despite an aggravated Covid-19 situation. Although there were measures to adjust the electoral process to the challenges of the Covid-19 pandemic, the second wave of coronavirus cases was in sight.

The new parliament was constituted in August 2020, ending the five months hiatus. However, as no particular political party or pre-existing coalition was able to secure enough seats in the parliament, negotiations for the creation of the government were suspenseful. Nonetheless, after a few weeks of negotiations, the Social Democrats (SDSM) and the Albanian DUI were able to form a government, securing an absolute majority (61 seats), thus taking control of the legislative. The parliament, however, remained unstable, as the government often found itself negotiating with minority party MPs on legislation that required their vote. Additionally, with Covid-19 cases on the rise within the parliament, decimating its staff capacity and affecting many MPs, the parliament found itself working in extraordinary conditions. However, the opposition, claiming that the majority is trying to undermine the oversight role of the parliament, refused to move the parliamentary sessions online. Moreover, although criticized by the European Commission 2020 country report, the parliament continued with the heavy use of the shortened procedure, without regard to the legal uncertainty it creates.

Unfortunately, the good news did not last for long. Despite co-hosting the first-ever Co-Presidency with the Western Balkan Summit Series (Berlin Process), in December 2020, Bulgaria decided to veto the Negotiation Framework proposed by the German Presidency. The reason behind the veto, according to Sofia’s position, is that the Macedonian national identity and history, as well as the Macedonian language, have ‘Bulgarian roots’.[1] With these moves, Sofia signaled its intention to veto the start of the accession negotiations with North Macedonia notwithstanding the Treaty of Friendship, Good-neighbourliness, and Cooperation signed in 2017, the 2020 Berlin Process co-presidency, as well as Bulgaria’s earlier track-record as an EU enlargement supporter. Even though the veto did not come as a surprise, the fact that North Macedonia’s membership was once again formally conditioned by historical and identity-related issues has left a taste of great bitterness to many citizens, proving again that the EU membership is a moving target.

North Macedonia went through a turbulent health crisis accompanied by parliamentary elections, another fiasco of its EU ambitions, and continued practice of spoils and patronage. So, what are we to expect in 2021?

We expect that three major factors will determine the 2021 outlooks: economic recovery, improved rule of law and trust in the institutions, and finally prospects for the effective start of the accession negotiations. All these three dimensions are determined by unfavorable contexts. In a nutshell, 2021 will be worst if not the same as 2020.

The Government declared 2021 to be a year of anti-corruption. Before achieving tangible results in these areas, there has to be an improvement in the integrity of the decision-making process and the judiciary. However, it is unlikely this will happen in 2021. The government will continue to appease interests that diverge from good governance for the sake of keeping the narrow majority. Tangible results in improving the judiciary are not expected soon if the exercise is at all successful.

The forthcoming census in April is already been disputed by the opposition, with allegations it will falsely represent certain ethnic groups. This will increase inter-ethnic tensions and coupled with anticorruption idleness will worsen trust in institutions.

In 2021 North Macedonia also hopes to recover from the economic recession caused by Covid-19 and reach immunization through vaccination. However, the distrust created from several failures to address the economic vulnerability in 2020 and delayed vaccine procurement, will be coupled by increasing inequality amidst the economic slowdown.

Likely, North Macedonia will not start the negotiations with the European Union in 2021. The continuation of the negotiations with Bulgaria without clear and secure incentive will increase the pool of frustrated moderates and thus play in favor of domestic radical political options and further deterioration of the EU`s credibility. The pressure for early parliamentary elections will grow in 2021, given it is already an election year on a local level.

[1] Bulgaria’s position has been outlined in Bulgarian Parliament’s 2019 Framework Position on North Macedonia’s and Albania’s EU accession, later reaffirmed with the explanatory memorandum sent to all EU member states in the end of September 2020.