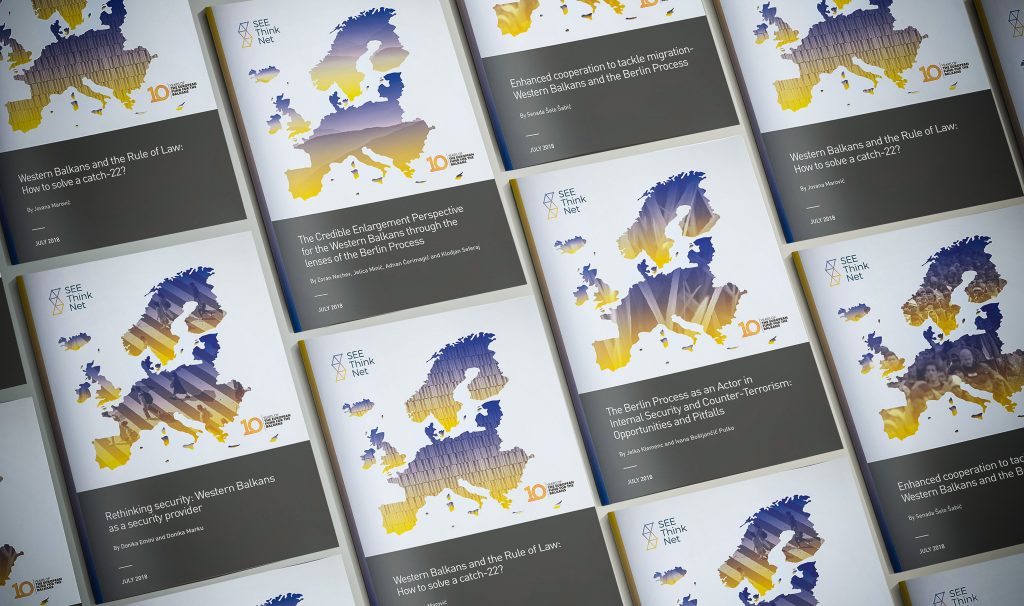 The SEE Think Net Network was established in mid-march 2018 with the generous support of the European Fund for the Balkans as the first regional network composed of civil society organisations that aim to monitor the topics related to the Berlin Process. The Network encompasses think tanks, civil society organisations and individuals from the 6 Western Balkan countries plus Croatia and Slovenia. Besides the Institute for Democracy “Societas Civilis” (IDSCS) which coordinates the Network, the SEE Think Net Network includes the Network of the European Movement in Serbia (NEMinS), Open Society Foundation for Albania (OSFA) and its affiliate, the EU Policy Hub, Adnan Ćerimagić, Politikon Network from Montenegro, Kosovar Centre for Security Studies (KCCS), the Institute for Development and International Relations (IRMO) from Croatia and the Centre for European Perspective (CEP) from Slovenia.

The goal of the SEE Think Net is to produce significant policy inputs and provide policy recommendations on topics that derive from the Berlin Process.

The SEE Think Net was presented to the public on May 16 by Zoran Nechev from IDSCS, the network’s coordinator, at the ‘Democracy That Delivers: Ten Years Later Unlocking The Potential Of The Western Balkans’ international conference in Sofia – a side event of the 2018 EU-Western Balkans Summit in Sofia.

The kick-off event of the network took place on July 4 at the Holiday Inn Hotel in Skopje. During this event organised by IDSCS, the first two publications of the network were presented to the public. These policy briefs focus on the security aspects of the Berlin Process. The first one is titled ‘The Berlin Process as an Actor in Internal Security and Counter-Terrorism: Opportunities and Pitfalls’ and written by Jelka Klemenc from IISG Support Group and Ivana Boštjančič Pulko from CEP. The second one is titled ‘Rethinking security: Western Balkans as a security provider’ and written by Donika Emini and Donika Marku from KCCS.

The second event of the network took place at the Media Centre in Belgrade on July 5 and was hosted by NEMinS. During this event, the third publication of the network, titled ‘Enhanced cooperation to tackle migration – Western Balkans and the Berlin Process’ and written by Senada Šelo Šabić from IRMO, was presented to the Serbian public.

The network’s third event was organised the next day by the EU Policy Hub at the Europe House in Tirana. On this event, the Albanian public had the opportunity to learn about the fourth policy brief titled ‘Western Balkans and the Rule of Law: How to solve a catch-22?’ written by Jovana Marović from Politikon Network.

Representatives from SEE Think Net (Zoran Necev, Jovana Marović , Senada Šelo Šabić) were present at the 2018 Civil Society Forum in London on July 10 as well. The day after, the fifth policy brief, titled ‘The Credible Enlargement Perspective for the Western Balkans through the lenses of the Berlin Process’ and written by Zoran Nechev, Jelica Minić (NEMinS), Adnan Ćerimagić, and Klodjan Seferaj (OSFA), was presented at the Chatham House Conference in London.