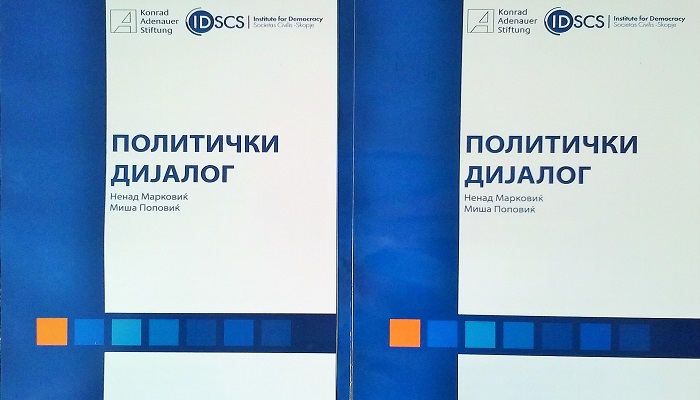 The cross-party political dialogue is not a goal on its own. It should represent an integral part of the political process in the country, occurring in many social areas, including not only the political parties as main actors, but also other stakeholders from the civil society. Taking this as a starting point, the analysis comes up with several conclusions.
The political dialogue most often comes into being as an instrument for conflict resolution. The opposing parties decide that the disagreements around the open questions will be solved through dialogue. That process is often long and consolidation is harder to reach. Hence, the spaces for dialogue should be nurtured, where the representatives of the opposing parties will decrease the tension on different levels and build mutual trust.
In Macedonia, the highest level of dialogue are the meetings of political leaders, where they could work on building mutual trust. Within the Parliament, more lasting forums for cooperation between the MPs can be established. Nevertheless, the informal spaces for political dialogue, mostly within the civil society, where NGOs and foundations work with parties’ representatives for the sake of mutual trust, should also be mentioned. However, the cross-party political dialogue is not only an instrument for a way out of the emerged crisis, but it is also a key tool for a sustainable reform process. Thus, an investment in long-lasting activities for developing such dialogue is also needed.
The forums for cross-party dialogues have only been temporary up till now. Outside the formal space for political dialogue, there are also the “Wilton Park” meetings in Mavrovo and the schools and trainings, occasionally organized by civil organizations. Through a long-lasting process of mutual training, the political parties’ representatives can alter the surrounding political culture, which is currently not entirely suitable for leading a cross-party dialogue.
All these conclusions converge towards the central point of the political dialogue – the human capital. The understanding that dialogue and cooperation are inherent part of the political process, should be internalized in the political behavior of the actors, in the same way as the political competition.
The aim of the dialogue is not only signing the final document, but also standing behind what is negotiated, thus leading to mutual overcoming of the crisis or change.
The entire book “Political Dialogue” can be downloaded for free on the following link –