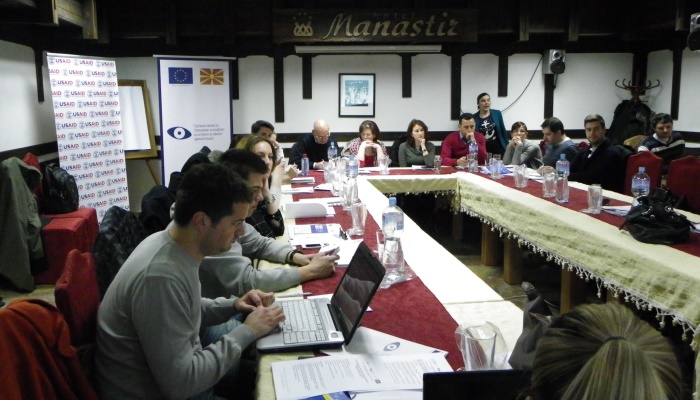 In the period 3-4 March 2015, at the Hotel Monastery in Berovo the second workshop on preparation of CSOs Strategy for prevention of conflict of interest was held. The workshop was conducted in the framework of the project ‘CSOs network for prevention of spoils and conflict of interest in the public administration’, financially supported by the European Union and implemented by the Institute for Democracy ‘Societas Civilis’ Skopje (IDSCS), the Institute for Economic Strategies and International Relations ‘Ohrid’ (OI) and the Macedonian Institute for Media (MIM).

During the workshop, members of 16 civil society organizations (CSOs) were preparing the draft text of a civil society Strategy to prevent conflict of interest in public administration. The Strategy is a document through which CSOs will set guidelines for actions and activities directed at prevention of conflict of interests, promotion of the merit system in recruitment of public servants, as well as other issues related to the overall reform of public administration in the context of Macedonia’s accession process to the European Union.

During the workshop, the representatives of CSOs also discussed the organization of 11 public debates across the country that will aim to prioritize the issue of conflicts of interest as a pressing problem in the reform of public administration. One session of the workshop was dedicated to the presentation of the Corruption Assessment Report (CAR) 2014, prepared in the framework of the USAID Anticorruption Programme and the regional report “Anti-Corruption Reloaded: Assessment of Southeast Europe” prepared by the SELDI network..

The workshop was realized with the financial support of the European Union, under the Civil Society Facility programme.