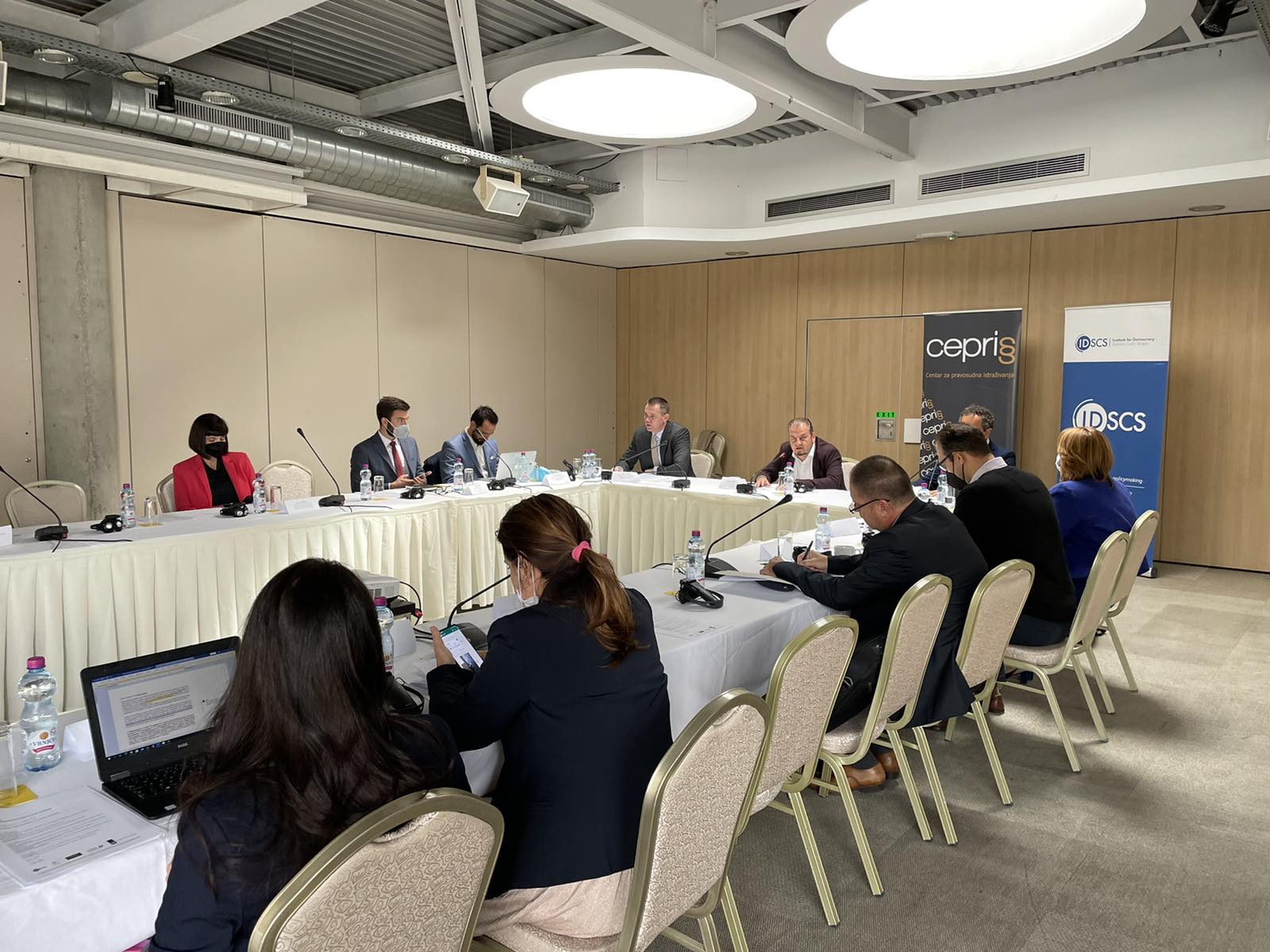 The Institute for Democracy (IDSCS) and the Centre for Judicial Research (CEPRIS) co-organised a closed hybrid workshop in Belgrade and online at the platform Zoom on 23-24 September. The event covered the topics of “Judicial Self-Governance and Judicial Culture” and “Role of Higher Courts in Securing Uniform Application of Law” respectively.

The first day of the workshop was opened and moderated by Miodrag Jovanovic, Full Professor at the University of Belgrade and a Managing Board Director at CEPRIS. In addition, Marko Troshanovski, President of the Institute for Democracy “Societas Civilis” – Skopje (IDSCS) and Bart de Bruijn, Regional Rule of Law Coordinator at the Embassy of the Kingdom of the Netherlands in Serbia have addressed the participants in their opening remarks.

Troshanovski, welcomed the attendees in the opening remarks and outlined the importance of the topics discussed at the workshop.

“Judicial culture, recognised in the Communication by the European Commission as a substantial policy area crucial in internal reforms, is the core of this project and by addressing different dimensions of judicial culture through a comparative comprehensive research the project aims to incorporate the recommendations from the research in the process of judicial training, but would also even complement the new methodology for North Macedonia and Albania”, said Troshanovski.

Bruijn, expressed his support to the project and the outcomes of its activities.

“We place great importance on the Rule of Law and a well-functioning, independent judiciary both as a prerequisite for EU accession, and also as a cornerstone of the EU internally. Therefore, it is important to us to see sincere progress in implementing reforms and committing to EU standards and principles before the next steps in the accession process can be taken”, said Bruijn.

Preshova presented the findings for North Macedonia and he emphasised that securing sustainable judicial reforms require not only the introduction of formal rule and institutions, but also the adequate adaptation and transformation of equally important informal norms and practices and when strengthening the rule of law societal transformation is required, which needs to start with the respective judicial culture. This notion is well embodied in the case of North Macedonia where even though the legal and institutional framework is to a large extent aligned with the European standards, the judiciary is still struggling to reach the required standards on judicial independence.

Marinković referred to the Serbian case by comparing the different time periods in which the Serbian judicial culture has developed. He explained that despite all the burdens of the past and present times, rulings in the Serbian judicial system are generally impartially rendered and correct on the merits. And the quality of their reasoning is also being improved in the direction of being more discursive, more attentive to the overall coherence of the case-law and more open to the international sources of law. These developments are mostly the product of the Serbian membership in the European system of human rights protection. In the case of Serbia, the “learning-by-doing” has helped a number of judges to question and even abandon the excessive formalism of post-Socialist law and the authoritarian legal culture based on many old- fashioned Continental legal myths.

Finally, Caka stated that judicial decision-making can be a direct outcome of judicial ‘role perception’ as it relates to their general position in society. The way in which a judge conceives his role is a significant factor in the entire decision-making process. In the case of Albania, the research showed that not all the judges in Albania embrace their role as actors who develop the law. Most judges in their everyday work apply the law rather than engage in interpretation. The interpretation of laws is seen as a subsidiary function that is called into action when the prior and main function- i.e. the application of the law is not possible. Judges do not pass moral values in their decisions or display any internal considerations they balanced in the decision making process.

During the two days of the event, multiple experts has expressed their views and perspectives on the topics. David Kosar referred to the lessons learnt from the Rise (and Fall) of Judicial Self-Governance in Central Europe, while Snezana Bjelogrlic, Member of the High Judicial Council and President of the Judges’ Association of Serbia, and Radovan Lazic, Managing Board Member at CEPRIS discussed the challenges in judicial self-governance in Serbia.

The focus of the second day was placed on the role of higher courts in securing uniform application of law. The panelists included Mirjana Lazarova Trajkovska, Judge at the Supreme Court of North Macedonia and Dragoljub Popovic, Judge at the European Court of Human Rights who discussed the regional perspectives on the topic.

The event was organised as part of the project „Bridging the gap between formal processes and informal practices that shape judicial culture in the Western Balkan”, coordinated by the Institute for Democracy “Societas Civilis” – Skopje in cooperation with the Centre for Judicial Research CEPRIS, Albanian Legal and Territorial Research Initiative (A.L.T.R.I) and the Asser Institute – Centre for International and European Law from the Netherlands. The project is supported by the Netherlands’ Fund for Regional Partnership – MATRA. 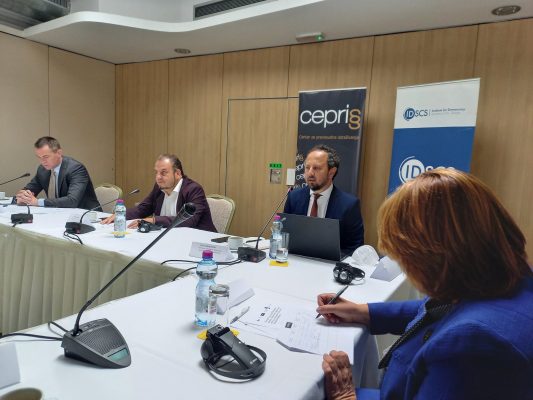 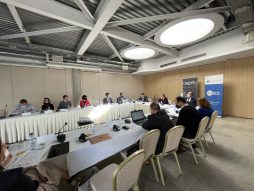 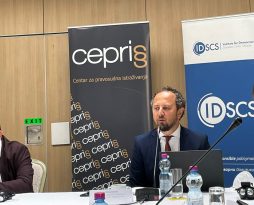 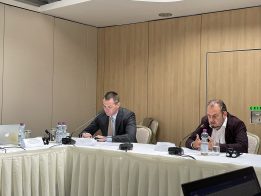 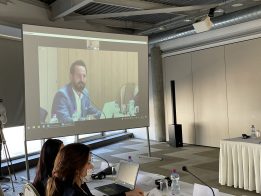 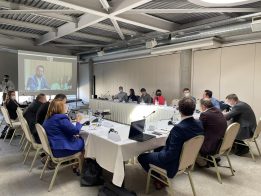 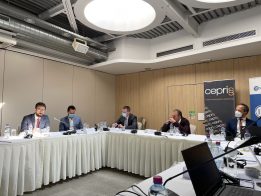 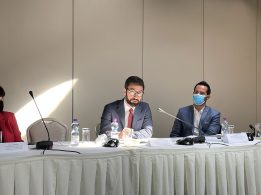 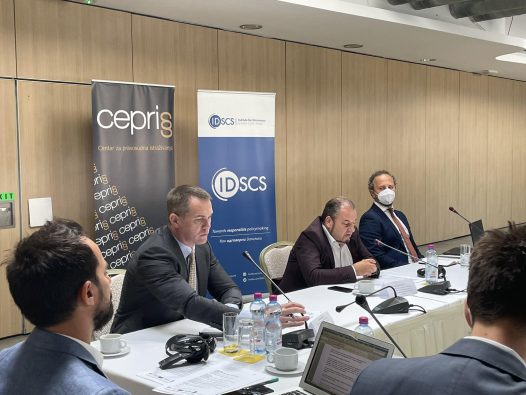 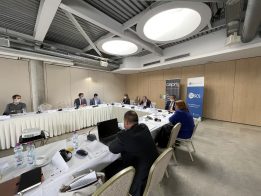 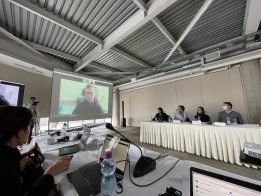 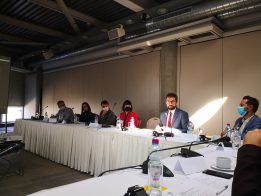 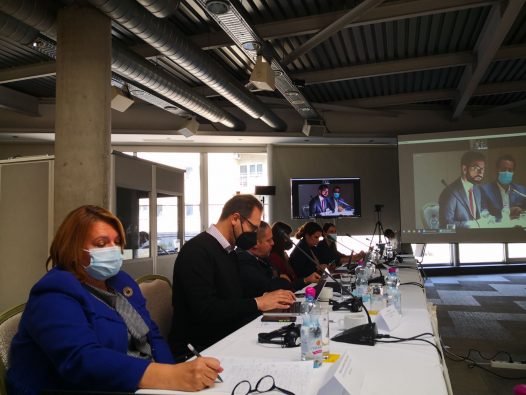 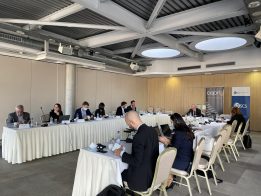 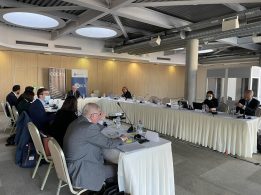 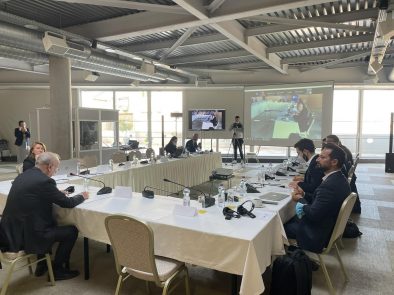 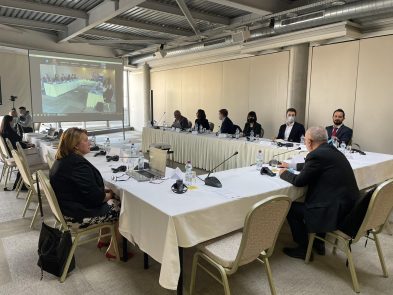