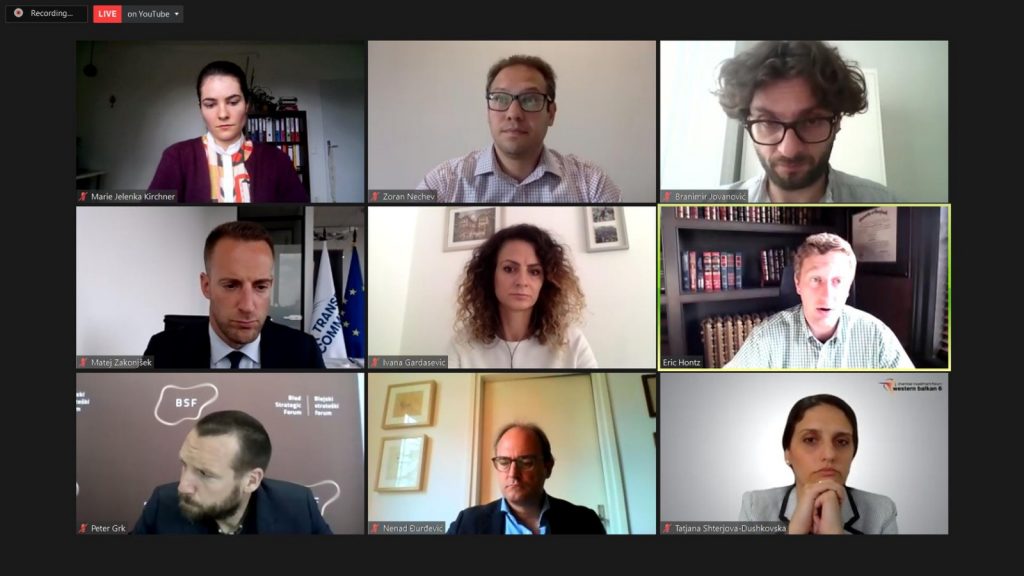 The Institute for Democracy and the Regional Cooperation Council yesterday co-organised the international online conference “Time to move to the Western Balkans: How diversification of supply chains can benefit EU resilience”, supported by the Center for International Private Enterprise from Washington, DC.

The conference builds upon the policy paper “Time to move to the Western Balkans: How diversification of global supply chains can benefit EU resilience”, co-authored by IDSCS’s Zoran Nechev and Marie Jelenka Kirchner. The paper served as a basis for discussion on the possibilities for diversification, shortening and re-localization of the European supply chains.

The event was opened by Marko Troshanovski, President of the Institute for Democracy and Eric Hontz, Deputy Regional Director, Europe & Eurasia at the Center for International Private Enterprise.

Troshanovski said that the pandemic has proved overreliance on China for almost everything related to the pandemic from face masks to car parts.

“The announcement of EU/US government(s) to diversify the global supply chain can be seen as an opportunity for the region. This goes in line with the announcement by the new US administration about decoupling from China, and democratic supply chains. From European side, this is important if EU wants to achieve certain level of strategic autonomy. The western Balkans has a role and it needs to play this role. Regional integration and cooperation thus is crucial in this sense“, said Troshanovski.

According to Hontz the Western Balkans can offer sustainability and resilience to EU supply chains.

“There is no magic investment from EU that will come into the region and suddenly transform the region. It’s a process that will take decades to complete. The quickest way is by encouraging and supporting local companies”, added Hontz.

Ivana Gardašević, senior expert on competitiveness at the Regional Cooperation Council, delivered the keynote speech. She said that Western Balkan region is particularly well positioned to offer nearshoring alternatives for most of the investors which are operating within the EU and that are looking to adopt more balanced distribution and diversification of supply sources.

Marie Jelenka Kirchner, associate researcher at the Institute for Democracy provided more details about the analysis “Time to move to the Western Balkans: How diversification of global supply chains can benefit EU resilience”.

“We focused on EU as value driven actor and we believe that the EU has a great potential. If EU manages to actually positon itself as a valuable player vis a vis European corporations but also vis a vis corporations and business in the region it can be used for overall transformation in the Western Balkans. This transformation will not only benefit the Western Balkans but also the EU on long term”, said Kirchner.

Branimir Jovanović, economist at the Vienna Institute for International Economic Studies explained the issues with just-in-time global production and how the Western Balkans can offer EU companies better nearshoring options.

“Western Balkan is the region that is the most attractive for European companies for moving the production there. It is close to Western Europe, it is also close culturally and the wages are still low”, said Jovanovic.

“First priority is EU enlargement. We would like to see North Macedonia and Albania starting negotiations. Secondly we would like to move things forward regarding cybersecurity resilience of the Western Balkans countries. The third is connectivity and green agenda”, added Grk.

Matej Zakonjšek, director of the Transport Community, said that in times of covid 19, Western Balkans resilience to crisis was strengthened when intra-Western Balkans Green Lanes were established at the beginning of pandemic.

“It basically prioritized the essential goods to pass the borders unabstracted and as fast as possible. We never had lack of essential goods in the Western Balkans and this was due to Green Lanes being functional. The Green Lanes from idea to realization took one month, from March to April. This is a symbol for what can happen to the region if there is a joint interest and political will”, said Zakonjšek.

Tatjana Shterjova Dushkovska, Secretary General of the Chamber Investment Forum Western Balkan 6, said that this year they will do mapping of the suppliers within the region.

“The data base will have systemized information about the companies but what is more important we will do mapping of all specificities on their production and capacities, the key products, the technologies they are applying, the certificates they have implemented and the current position they have in the supply chains at the moment”, explained Shterjova Dushkovska.

Nenad Đurđević, member of the Chamber of Commerce and Industry of Serbia talked about ways for further strengthening the institutional framework in order to make the implementation of the common regional market more efficient and effective.

You can watch video of the conference and the debate on the following link: