By Simona In : News
Home / News / North Macedonia’s accession process to the EU and the role of the European Parliament 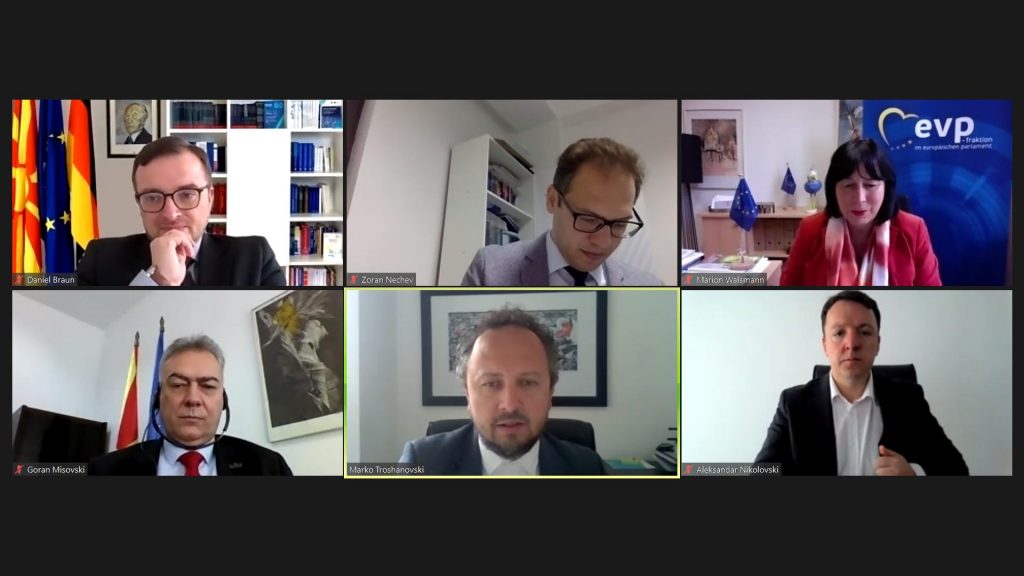 The introductory addresses at the conference were given by Daniel Braun, the official representative of the Konrad Adenauer Foundation in the Republic of North Macedonia, and Marko Trošanovski, President of the Institute for Democracy. Brown highlighted that North Macedonia finally needs a secure perspective to start the negotiation process with the EU.

“North Macedonia’s accession process is a story that has been going on for a long time and it does not seem to be coming to an end. The relations with the neighbouring countries are not always simple. I think it is important for North Macedonia and the other candidate countries from the Western Balkan to have a European perspective, which should be supported to start with the negotiations as soon as possible”, Braun said.

According to Trošanovski, it is a great disappointment for the citizens not to receive a date for negotiations, but he believes that this should not be discouraging, emphasizing that it is necessary to continue with the reform process.

“The Assembly should play the key role in this regard, which should have control over the process, and a national consensus should be built there for the negotiation positions. If the reforms are conducted well, in the long run, systematically and structurally, it will increase their resilience and legitimacy. Unfortunately, during the previous year of the pandemic, the Parliament was far below the level of its mission. Let’s hope that in the coming period it will start operating fully, as it should, being the highest branch of government”, Trošanovski added.

The Vice President of the Assembly, Goran Misovski also addressed the participants in the event, emphasizing that only a strong and efficient parliament, with a developed culture of inclusive dialogue and building a consensus can be a real and effective driver of reforms.

“North Macedonia’s Assembly continuously reaffirms its strong determination to drive the reform processes forward and to deliver concrete measures to meet the European aspirations of the citizens. On that path, our natural partner in the EU is the European Parliament, which expresses its strong support for our perspective through concrete assistance and cooperation”, Misovski said.

Marion Walsmann, an MEP and Deputy Chair of the Delegation to the Joint Parliamentary Committee EU-Republic of North Macedonia, said that the European Parliament had written a report on the potential of North Macedonia and that some MEPs had asked for the first Intergovernmental Conference.

“I am strongly convinced that formal negotiations will begin soon, however, efforts are needed to implement reforms”, she said.

“In the annual program of the Council, which we need to adopt, we will propose monitoring of the negotiation methodology, as well as building consensus on the negotiation structure. We should not seek consensus at leadership meetings and other informal forums but in the Council”. Nikolovski added.