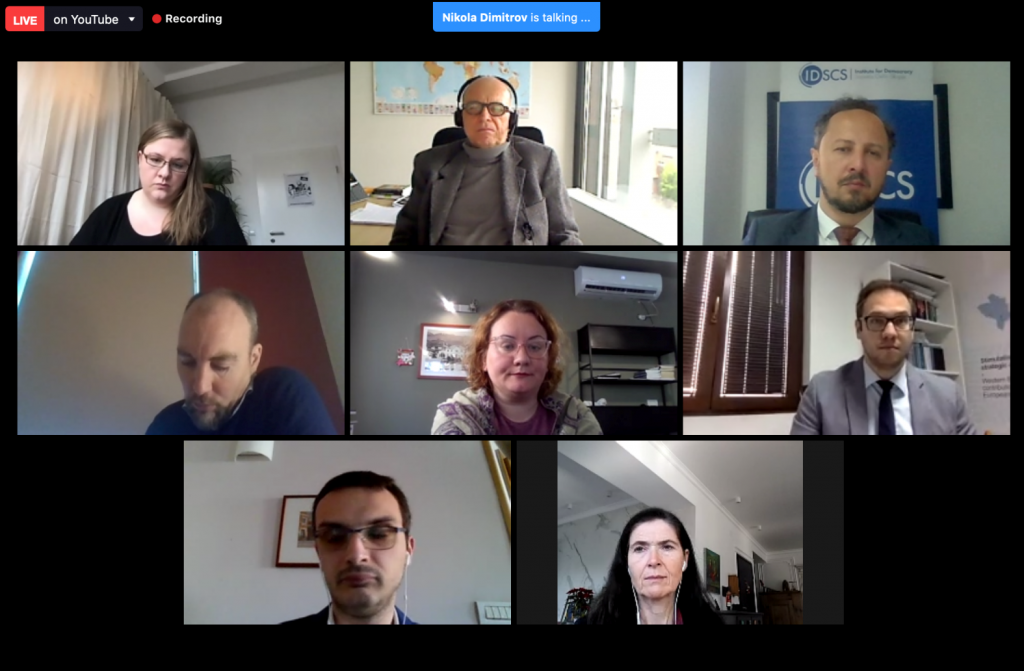 The event was opened by the president of Institute for Democracy Marko Troshanovski and the German Ambassador to North Macedonia, H.E. Anke Holstein.

In his welcoming remarks, Troshanovski said that for this part of Europe, including the Western Balkans countries in the Conference on the Future of Europe, rethinking unanimity as a mode of decision-making in terms of enlargement, and reinforcing parliamentary and participative democracy is essential.

“EU art of compromise often appears admirable but consensus principle is more an obstacle then an advantage and it definitely undermines EU legitimacy and EU`s transformative capacity. The blockage of the negotiating framework, following a decision by the Council to start the process, and the recent statements from Bulgarian officials denying the Macedonian identity, have deeply disappointed and disillusioned the Macedonian citizens. We are prepared for an accession process based on shared EU values and standards, but not one as an instrument for changing our identity. But it is not about us only, “No” to the EU accession process will have severe security consequences for the region and EU`s management of external borders”, said Troshanovski.

According to Holstein, the German Council Presidency didn’t achieve the goal of enlargement, a goal as she said, that Germany shared, shares and will share 100% with North Macedonia.

“In the enlargement process, decisions require unanimity, we didn’t manage to reach this unanimity. The decision from March, the green light for opening the accession talks for North Macedonia and Albania is a biding one and it bides all 27 member states and is a question of credibility for the EU to stick to this decision and to implement it as soon as possible. The question is not “if” but “when” the next steps are going to happen. For the enlargement process it is very dangerous to import historical questions, it sets dangerous precedent for the region. Bilateral disputes need to be resolved bilaterally and not within the enlargement process”, emphasized Holstein.

The Keynote speaker at the event was Nikola Dimitrov, Deputy Prime Minister for European Affairs of North Macedonia, who noted that North Macedonia has experience with vetoes but it is important to maintain an adult, mature policy and not to fall in to the trap of despair.

“If the accession process is burdened with vetoes that are not in line with European values, I think we have to do everything we can to be in a good reform shape. We should be persistent and to continue to search for a solution with Bulgaria that will be dignified and European. The stakes are very high not just for us”, said Dimitrov.

The panel after that was joined by representatives from the European Think Tank community.

Roderick Parkes, Head of Alfred von Oppenheim Centre at German Council on Foreign Relations (DGAP) reflected upon the expectations and the performance of the German presidency at large. Parkes concluded by saying that not all strategic questions can be solved by Germany and sometimes, it is required a broader look at the bigger picture.

Dušan Reljic, Head of Brussels Office at Stiftung Wissenshaft and Politik (SWP) spoke about the impact of the German presidency on the Western Balkans. He noted that the nature of the EU consensus has slowed the process of accession for Western Balkan and maybe the EU should consider majority voting in the future.

Valeska Esch, Deputy Executive Director at Aspen Institute Germany focused on the German strategic cooperation with the Western Balkans through EU and bilaterally and on Trans-Atlantic EU-US engagement in the region. She said that the Bulgarian veto of the Negotiation framework is harming the EU enlargement process.

Talking about the internal dynamics and the repercussion, Zoran Nechev, Head of Centre for EU Integration at Institute for Democracy, emphasized that the time is on an essence. If we don’t move quicker, we will integrate a region without people. According to him, North Macedonia has done more than enough and the EU should have found a way to solve the blockage and implement its own decision from March.

The executive director at Albanian Institute for International Studies (AIIS) Alba Cela reflected upon the status quo regarding Albanian membership in EU, the judicial reform and the overall political climate in Albania.

You can watch video of the conference and the debate on the following link: