Closed workshop: „Bridging the gap between formal processes and informal practices that shape judicial culture in the Western Balkan” 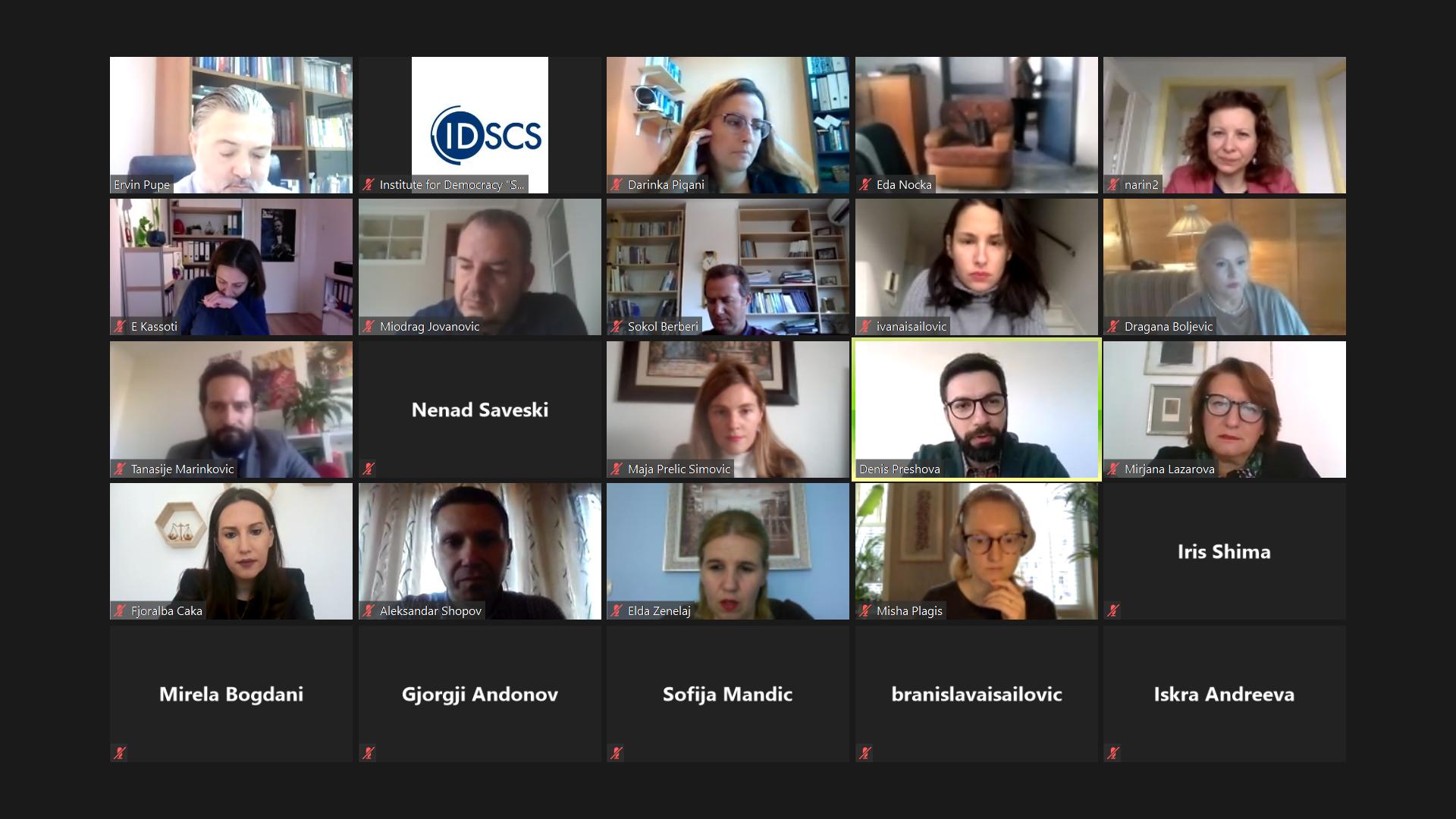 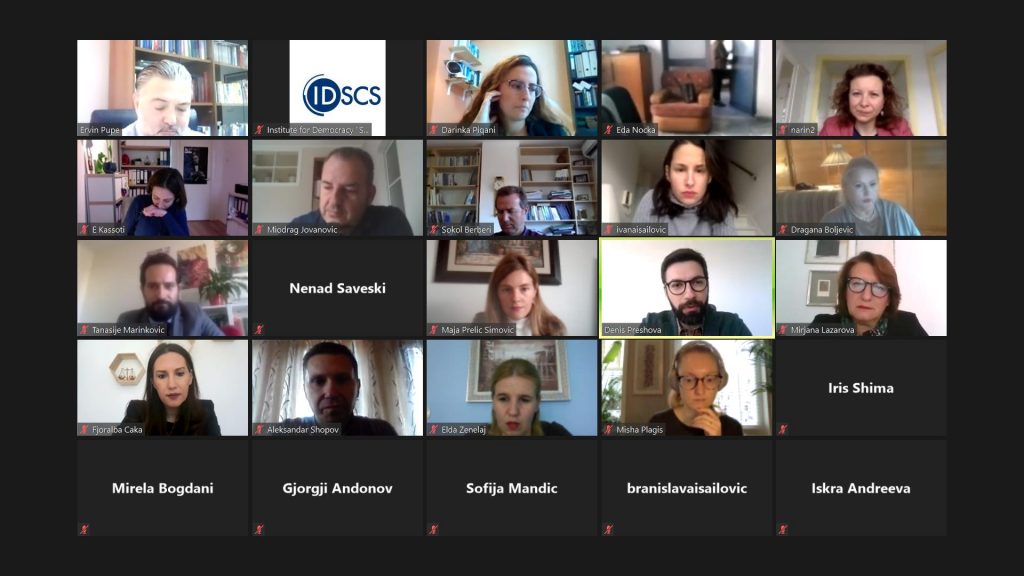 The Institute for Democracy on November 20 organised a closed online workshop on the topic „Bridging the gap between formal processes and informal practices that shape judicial culture in the Western Balkan” as part of the same-titled two-year project. The project focuses on the judicial culture situation in the Western Balkans, with specific emphasis on the role of judges in the development of the law in North Macedonia, Albania, and Serbia.

The workshop was moderated by Denis Preshova, associate researcher at the IDSCS and assistant professor at the Faculty of Law ‘Iustinianus I’ in Skopje. Preshova introduced the project overall and identified the project goals and objectives. He emphasized the importance of projects of this kind especially in the process of Europeanisation of the respective legal systems of the WB countries. Consequently, he defined that the most relevant to the current situation and aspired goal of the project is to underline the shortcomings of the judicial culture especially in the context of the European integration.

The workshop consisted of three sessions: statements from the key speakers, a discussion on the role of judges in the development of law as a specific aspect of judicial culture, and a follow-up discussion.

The key speakers of the workshop were Judge Mirjana Lazarova Trajkova, a judge of the Supreme Court of North Macedonia and a former Judge at the European Court of Human Rights, Judge Dragana Boljevic, a judge in the Belgrade Appellate Court and an Honorary President of the Judges’ Association of Serbia and Judge Ervin Pupe, Judge in the Supreme Court of Albania. They reinforced the argument that the judicial culture in the three focus countries is defined by a lack of proper training and a strong need for greater independence of the judges.

Judge Mirjana Lazarova explicated that Western Balkan’s country judicial culture characterize by strong influence by political parties and that daily politics often lead the actions which are shaking and shaping the justice system. Judge Dragana Boljevic added that the experiences of the fellow judges in the Association of Judges demonstrate great impact by politics, which may be a result of a deficit of safeguards for the judges, and not just safeguards in a legal sense. Finally, the key speakers’ session was concluded with Judge Ervin Pupe, who stated that dealing with integrity requires support to the rule of law and its implementation rather than just its creation.

The experts’ discussion included Darinka Piqani, Assistant Professor of EU Law at Leiden University, Fjoralba Caka, Lecturer of EU Law at the Faculty of Law, University of Tirana, and Senior Researcher at the Albanian Legal and Territorial Research Institute (A.L.T.R.I).  Tanasije Marinkovikj, Full-time Professor a t. the Faculty of Law Belgrade and Associate at the Centre for judicial research CEPRIS, and Denis Preshova, associate researcher at the IDSCS and assistant professor at the Faculty of Law ‘Iustinianus I’ in Skopje.

Piqani discussed the meaning of Europeanisation and its elements. She recalled that Western Balkan countries as the countries from Eastern Europe have a history of law as a tool of ruling political parties. She also explained that it is extremely difficult to transform the judicial culture in an environment where a lack of knowledge of EU law and a clear obligation of the EU treaty exists. Additionally,  Caka stated that culture is not monolithic and static but instead rather software that could be reconstructed and deconstructed. However, according to her, it is noticeable that judges are fearing criticism and confrontation which results in distrust from the public itself. Mrs. Fjorbalba emphasized the need for specific networks of judges where they can discuss their dilemmas and ideas of Europeanisation. Finally, Marinkovikj discussed the role of the justice system within the governance. He explained that the nature of the justice system remains the weakest branch of governance and it is rarely independent, especially in countries as North Macedonia, Serbia, and Albania. Preshova briefly discussed the main traits of judicial culture in the former socialist countries in which certain features of the previous system still persist, particularly, in the self-perception of judges as well as their approach to developing the law in general.

All of the speakers agreed on the importance of training and a shift in the mentality in the judicial culture. Judges and prosecutors should be trained and go through an education process that will allow them to develop doctrine and follow the legislation simultaneously.

The workshop concluded with a discussion between the speakers and the present guests.

This online workshop took place as part of the project „Bridging the gap between formal processes and informal practices that shape judicial culture in the Western Balkan”, coordinated by the Institute for Democracy “Societas Civilis” – Skopje in cooperation with the Centre for judicial research CEPRIS, Albanian Legal and Territorial Research Initiative (A.L.T.R.I) and the Asser Institute (Centre for International and European Law) from the Netherlands. The project is supported by the Netherlands’ Fund for Regional Partnership – MATRA.