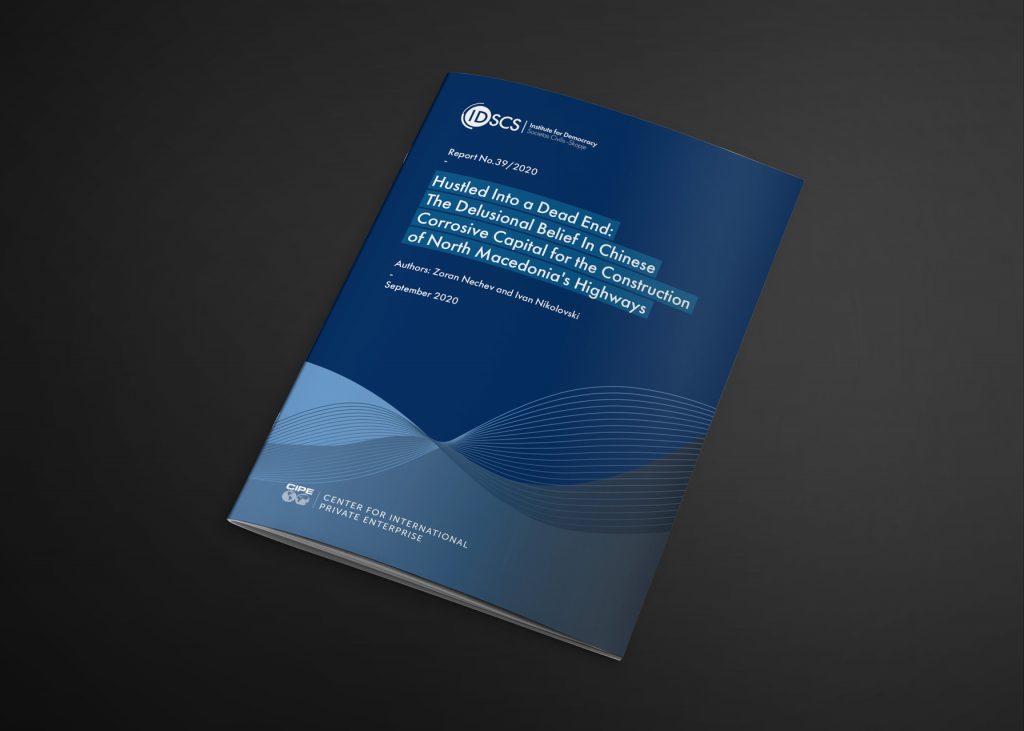 This research paper examines trade relations and economic engagement between the People’s Republic of China and Republic of North Macedonia. It includes an assessment of how Chinese investment in the country affects its governance. The corrosive capital intertwined in this investment “undermines trust in institutions, weakens the rule of law, promotes opacity, and seeks to exert monopoly power over vast swaths of the economy”. This research paper specifically looks at the questionable conditions of loans from the State-owned Export-Import Bank of China for the notably problematic Kichevo-Ohrid (57km) and Miladinovci-Shtip (47km) highway construction projects.

The original contract for the loan was worth 783.4 Million USD, which was 90% of the total value of the construction works. The total value of construction works envisaged in the contract agreements for both highways was 870,422,844.32 USD. As of now (September 2020), the total delay amounts to 1912 days (five years and two months), and estimated new total value for the highways is calculated at 1,081,811,412.94 USD. If one adds the expected interest payments in the next 15 years in the amount of 155.6 million USD, the total cost will reach 1.2 Billion USD.

The approval of the credit was conditioned with the selection of a company (Sinohydro) from the list provided by the Chinese government through the Chinese embassy in Skopje. These deals were made through direct and undisclosed negotiations between the Chinese and Macedonian governments. The secretive agreements sparked a notorious corruption scandal.

Loan agreements with China are tailored to accommodate Beijing’s interests, including with Sinohydro in North Macedonia. They often include provisions that are against EU law. These include non-competitive contract awards (direct dealing) and/or enacting laws that prevent fair competition. In other words, China blocks the rules to ensure its money is spent wisely and in the best interest of its people. On the receiving end, the direct dealings do not ensure best value for the money invested.

The corrosive capital coming from China, as noncompetitive loan conditions set by state-owned Chinese banks, threaten democratically established institutions and market economy. It also raises serious concerns over North Macedonian authorities’ resilience to corruption and their willingness to ignore the rule of law and execute projects of this kind in opaque and non-inclusive manners. It appears China’s way of working is opposite from the political and economic model and liberal values North Macedonia strives to achieve through its alliances (NATO) and prospective membership in the EU.

This study provides several recommendations for different state and non-state actors. Here are the key of them:

The government should be committed to EuroAtlantic integration and membership by:

The parliament should exercise a more thorough oversight by:

Civil society organizations, independent media, and business support organizations such as chambers of commerce should demand:

You can read the research paper here: