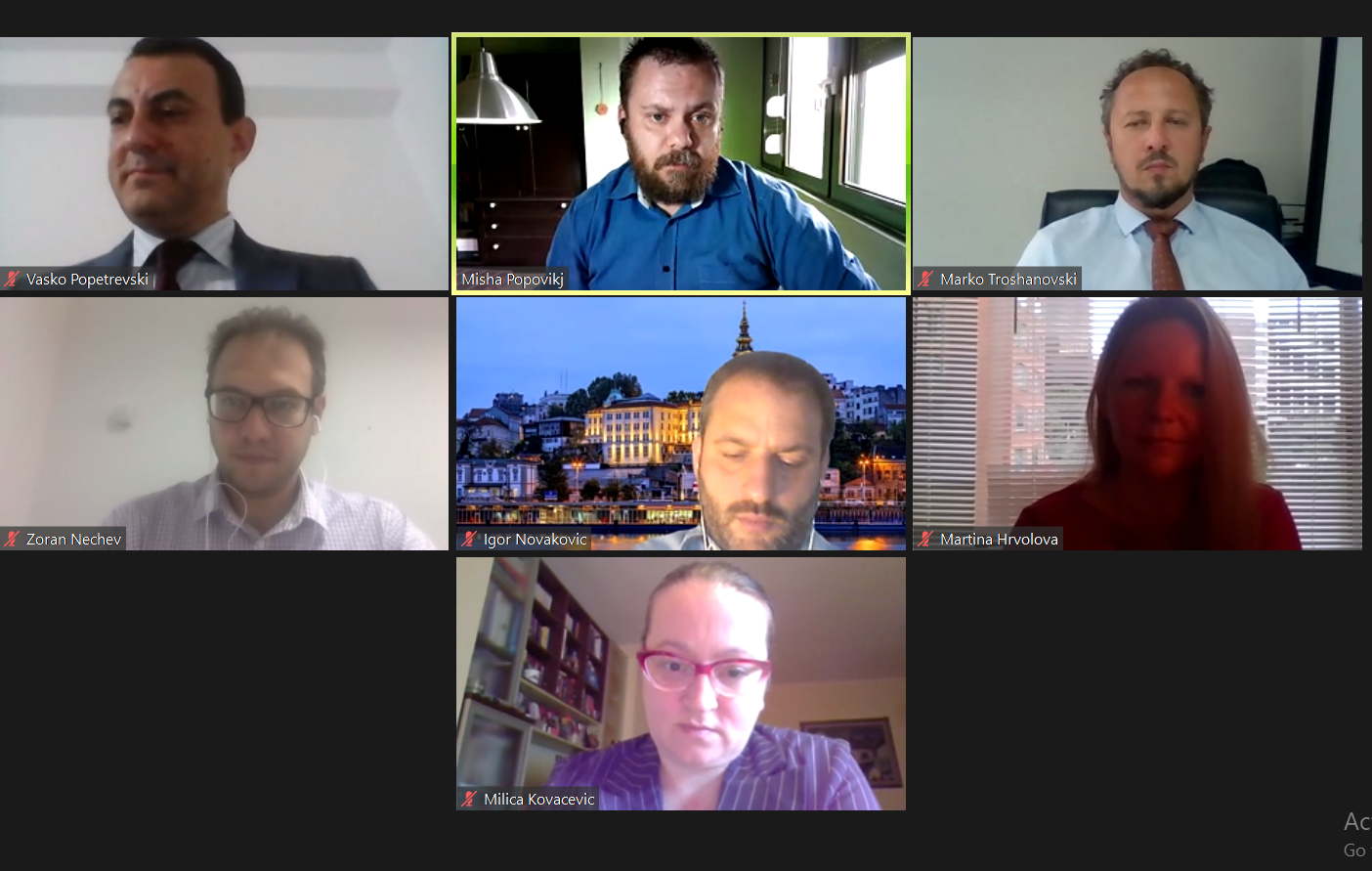 The Institute for Democracy organised online conference “Corrosive capital’s threat to democracies in the Western Balkans” where researchers from North Macedonia, Montenegro and Serbia presented their findings addressing corrosive capital flows in these three countries.

The president of IDSCS, Marko Troshanovski in his welcoming remarks noted that when we talk about “corrosive capital” we are talking about easy, and at first glance, cheap money that actually in reality come with a price – eroding competitiveness, public procurement, trust in institutions, corruption and clientelism and not seldom disputable quality of services or products.

“We need comprehensive due diligence and ownership checks before allowing capital into privileged positions in the economy. Risk analysis and ownership checks must be integral parts of the process. The government must focus only on potential investors with proven anti-corruption policies. Investors must prove good governance standards before entering particular industrial sectors and attaining privileged position through aid or concessions. There must be regional commitment to this, otherwise the raise to the bottom in attracting (whatever) foreign capital between WB countries will continue. We as Institute, as a chairman to the Think Tank Forum within the Berlin Process and as reporters to the ministerial meeting, we committed and we will advocate for participating countries in the process to commit to this high level of good governance, transparency and public procurement standards in order to increase the resilience of the countries to the corrosive capital”, said Troshanovski.

According to Martina Hrvolova, program officer for Europe and Eurasia at the Center for International Private Enterprise, in unfree societies in which citizens and independent institutions are not able to hold the top leadership accountable, corrosive capital will unfortunately continue to exist.

“Any response to this challenge needs to focus on exposing corrosive capital but also finding solutions how to address issues. The challenges are very complex, so must be our response to it. Governments, CSOs and businesses have an important role to play because when they work together, democracies and economies flourish”, stated Hrvolova.

Misha Popovikj, senior researcher and head of the Center for good governance at IDSCS emphasized that there are two paths for corrosive capital to enter a country.

“The first is through high-level deals, involving the top tier of political officials, and typically incur specific legislation that accompanies the deal. They enter through exploiting a fragile if at all present, check and balances system between the executive, legislative, regulatory and judicial authorities. The second is through institutional channels, where weak institutions permit the inflow of corrosive capital through ineffective procedures or ill-defined separation of control from decision making and implementation. They can occupy industrial sectors with limited competition – such as extractive industries, power generation etc., or invest in large employers”, said Popovikj.

One of the authors of the research paper Hustled Into a Dead End: The Delusional Belief In Chinese Corrosive Capital for the Construction of North Macedonia’s Highways, Zoran Nechev, senior researcher and head of the Center for European integration at IDSCS, explained that the paper specifically looks at the questionable conditions of loans from the State-owned Export-Import Bank of China for the notably problematic Kichevo-Ohrid and Miladinovci-Shtip highway construction projects.

“The Macedonian government awarded the construction to Sinohydro Corporation Limited Beijing, a Chinese state-owned enterprise. There was a complete lack of transparent, competitive public procurement in the contract agreements with Sinohydro. These deals were made through direct and undisclosed negotiations between the Chinese and Macedonian governments. The secretive agreements sparked a notorious corruption scandal. The corrosive capital coming from China, as non-competitive loan conditions set by state-owned Chinese banks, threaten democratically established institutions and market economy. It also raises serious concerns over North Macedonian authorities’ resilience to corruption and their willingness to ignore the rule of law and execute projects of this kind in opaque and non-inclusive manners”, said Nechev.

In Montenegro, the same governance gaps that were identified by corrosive capital coming from Russia now are again present with China, explained Milica Kovacevic, president of the Center for democratic transition.

“The approaches are different, the goals are different but there is still weak rule of law, lack of transparency, no screening or vetting mechanisms, very weak oversight. Chinese companies are showing interest in energy and infrastructure but the biggest project is the highway which is not investment it is a huge loan, the biggest loan Montenegro ever took and it is the biggest project Montenegro ever implemented”, said Kovacevic.

Igor Novakovic, research director of the International and security affairs centre – ISAC Fund, noted that Serbia, during the past decade became a hub for Chinese loans and investments.

“Our officials are often stating that the amount of Chinese investments soon will reach 10 billion US dollars but much of it are in fact loans and not investments”, said Novakovic.

The conference was part of the project “Addressing Corrosive Capital Flows” supported by the Center for International Private Enterprise (CIPE).

You can read the research paper prepared by the Institute for Democracy here: