IDSCS organised the conference “New Vitality for an Old Debate: The state of Europe” 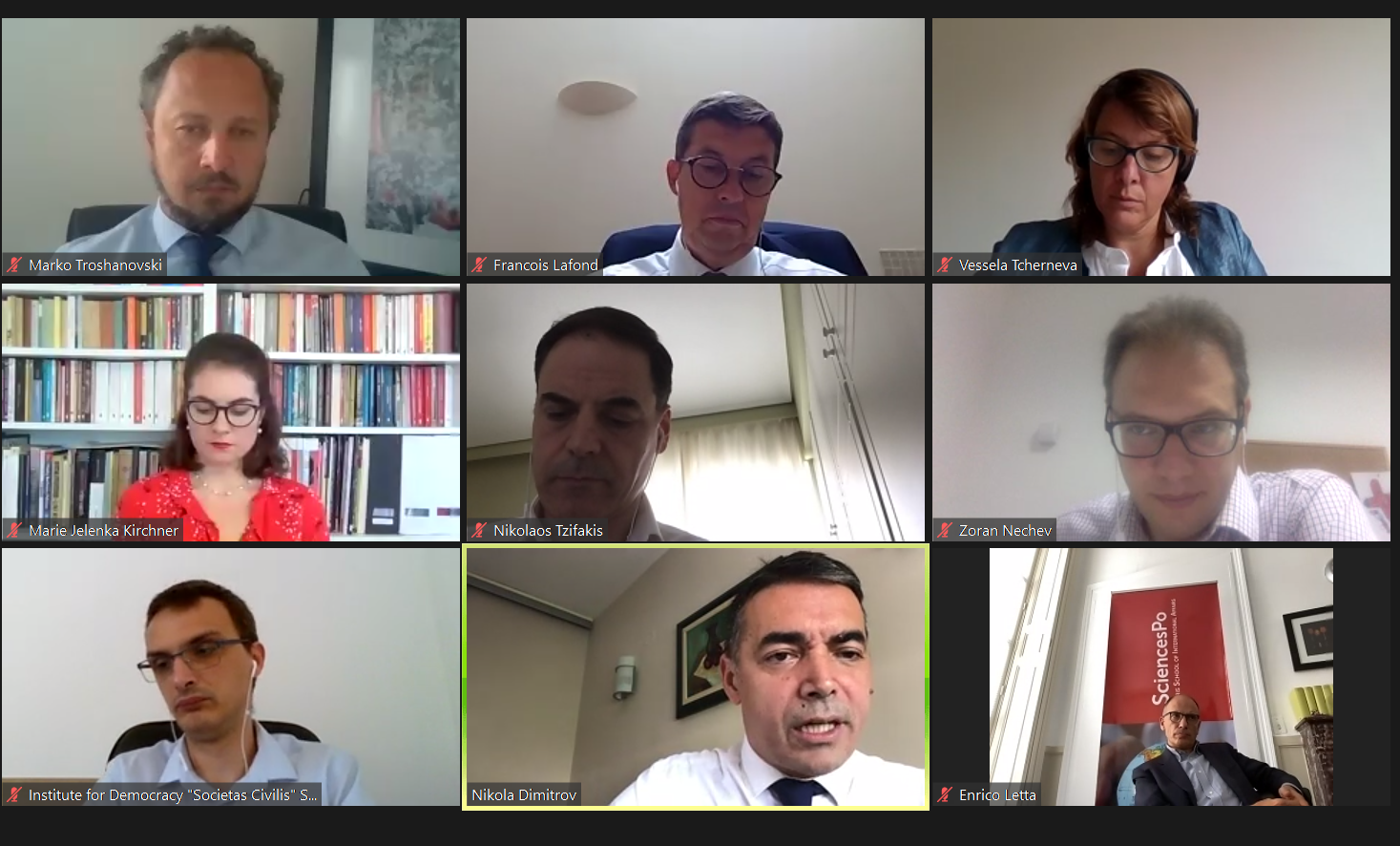 The Institute for Democracy today (24.09.2020) organised online 2020 State of the Union conference “New Vitality for an Old Debate: The state of Europe” where panelists discussed how, the status quo and forward-looking ambitions and policies, could impact the European future of the Western Balkans.

The president of IDSCS, Marko Troshanovski emphasized that the Western Balkans are an integral part of Europe and should be regarded as serious partners in European affairs.

“The future of the EU and the Western Balkans are inextricably connected which is why challenges such as environmental questions, migration and questions of security must be tackled together in a common and unified approach at eyelevel. The point is that contemporary challenges, of any nature, do not conform to EU external borders”, said Troshanovski.

The key note speech was delivered by Enrico Letta, former Prime minister of Italy and current President of the Jacques Delors Institute and Dean of the Paris School of International Affairs. He draw parallels between the transformative period of 1989-1991 and present time, and elaborated how to “change the image and substance of Europe” together with the Western Balkans.

“This EU Commission has the mission to be geopolitical Commission and that is very good news to the accession countries because the completion of the enlargement process with the Western Balkans is one of the most important missions in a geopolitical term”, said Letta.

Enlargement is still very important for the stabilization of the continent and the EU will not be a global power if it is not capable of adding Western Balkan countries as future members of the European family, said Francois Lafond, adviser to the Deputy Prime Minister in charge of European Affairs in North Macedonia

“There is no doubt in the current French presidency office that the Western Balkans will be part of EU as soon as it will be possible, however, the countries need to implement accession reforms”, added Lafond.

Marie Jelenka Kirchner, associate researcher at IDSCS, emphasized that with the new leadership under Ursula von der Leyen the EU Commission has signaled in narrative and action that the Western Balkans matter and belong to Europe.

We need to see how we can improve the image of the country and convince the others that we are not the burden but we are the added value to the EU, says Dragan Tilev, associate researcher at IDSCS and state counsellor for EU Affairs at the Secretariat for European affairs.

“Now we have all the member states that will monitor our progress and try to help us but sometimes make our life more difficult”, added Tilev.

Our researcher Ivan Nikolovski focused on internal challenges, the participation of CSOs in the accession negotiations and the need for streamlined, sustainable, efficient and effective negotiating structure.

“IDSCS believes and advocates that there needs to be a single chief negotiator, which will embody the ‘political’ and ‘technical’ aspects of the accession negotiations. In terms of duration, this process will ‘outlive’ several governments and eventual government changes. Therefore, the person appointed should be non-partisan, impartial, independent, knowledgeable about the specificities of the accession talks and the EU integration in general, and resilient to the changes in the national political environment. Furthermore, this would make the process much more efficient on our end”, stated Nikolovski.

Vessela Tcherneva, Deputy director of the European Council on Foreign Relations and head of the Sofia office, thinks that the accession process has geopolitical meaning because it is the main framework of keeping the region within. According to her, the risks of disrupting this process can also be geopolitical risks.

Nikolaos Tzifakis, Associate Professor at the University of Peloponnese and member of BiEPAG, shared his optimism on North Macedonia’s EU accession but he remains skeptical about EU and Greece relations with Turkey which, according to him are an important intervening factor that should be taken into consideration in the region.

Final remarks and outlooks were given by Nikola Dimitrov, Deputy Prime Minister for European Affairs of North Macedonia who said that with the geography, economy, history, culture, North Macedonia is very much part of EU.

“There are so many reasons for the accession process to work. We need the first Intergovernmental conference by the end of the year under the German presidency. We will either focus and do everything we can to bring Europe at home, or the talent and those who are supposed to essentially carry this burden will end up in EU themselves. It is in the interest of the region, its people and of the EU to make this process work. The EU agenda is excellent opportunity for our society to unite. All the voices need to be heard, the government, the opposition, the parliament, and the civil society”, concluded Dimitrov.