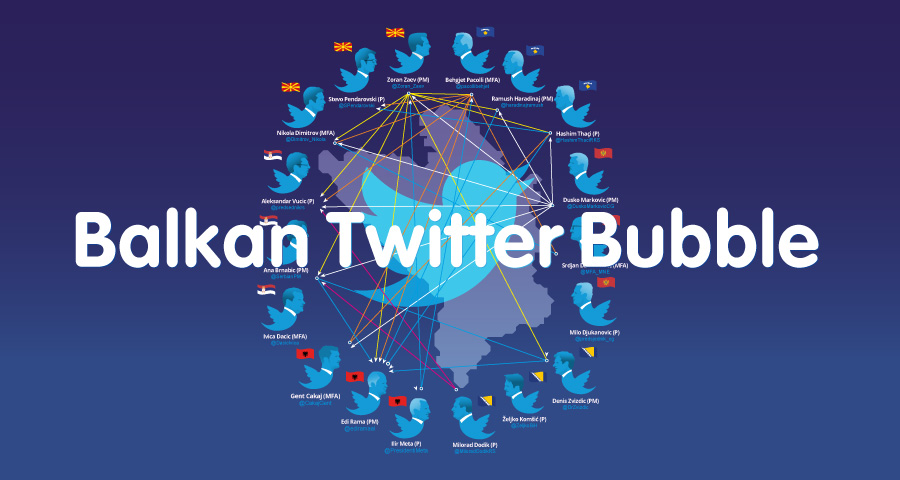 To what extent are politicians from Western Balkan countries connected to their counterparts from other countries in the region? Do they follow political actors from the European Union? Or maybe rather national representatives? With permission of Twitter, IDSCS has extracted online relationships between accounts in the period between August and September 2019.

One aspect of this research is to see the level of connectivity of political figures via Twitter. Connections on Twitter are arguably not the most relevant value to measure the quality of bilateral or international relations, but in a political sphere with increasing significance of the tweet as a political medium, it matters more and more who follows whom.

This short analysis is not designed to be understood as a policy recommendation, but is instead intended to link the increasing importance of social media to the bigger context of regional cooperation and EU integration of Western Balkan governments. In this, the analysis does not come to conclusions, but instead presents trends and patterns in social media activities of high-level political figures from the Western Balkan.

Many politicians from the Western Balkans have surely discovered Twitter as a medium to promote their activities and to boost bilateral relations by occasional congratulating tweets. This is reflected in activity levels: More than two thirds of all accounts tweet several times a week, if not a day. This activity is also reflected in connections to other national politicians from the same country: national accounts are very-well connected with each other. This is, however, not the same beyond national borders. On the international level, less than a third of users analysed in this research show interest in EU or global affairs – if measured along their following of EU, EU member state or NATO accounts.

EU and NATO leaders demonstrate a vast lack of engagement with the Twitter profiles of their Western Balkan counterparts. None of the EU member states’ chiefs, such as the German Chancellor Angela Merkel or the French President Emmanuel Macron, follows their colleagues from the region.

The Secretary General of the Alliance, Jens Stoltenberg, follows only the Macedonian Prime Minister, Zoran Zaev.

Only two Prime Ministers (North Macedonia and Montenegro) follow a substantial amount of non-national politicians from the region and only the Minister of Foreign Affairs of Kosovo is similarly connected in the region.

The unresolved question remains whether politicians use Twitter to scroll through their feed, trying to find out what has been going on outside their own actions or whether Twitter remains largely a medium to inform others and promote one’s own politics.

The publication and the infographic are available on the following links: