In the Western Balkans, those who seek benefits from political parties have almost six times the odds to being pressured to exchange their vote for money/favors than those who do not seek help. The fact is revealed within the INFORM project survey.

The report “Informal life of Political Parties in Western Balkan Societies” examines political parties’ strategies of electoral mobilisation that rely on clientelist practices, which, we find that vary across the countries in the region. Report findings are primarily based on data from multi-country survey conducted in May and June 2017 (N=6040 across the Western Balkans) as well as semi-structured interviews ethnographic field research and archival work.

Survey results suggest that one in five respondents in Montenegro (23%) and Albania (21%) reported receiving an offer of money or favours in exchange for a vote. The corresponding figures in Bosnia and Herzegovina (BiH) and Kosovo were 15% and 13% respectively, 8% in Serbia and 7% in Macedonia. 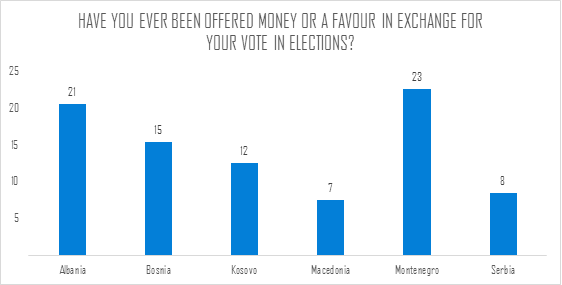 Based on the survey data, we demonstrate that benefit seeking and offers from political parties are significantly intertwined. In Kosovo, benefit seekers have 11 times the odds of participating in a clientelist transaction, 9,4 times in Albania, 7 times in BiH and 6,3 times in Macedonia. While the lowest in the region, the odds of benefit seekers are still practically high in Serbia (3,8 times) and Montenegro (3,3 times). At the regional level, benefit-seekers have 5,6 times higher odds of participating in clientelist transactions than non-benefit-seekers. 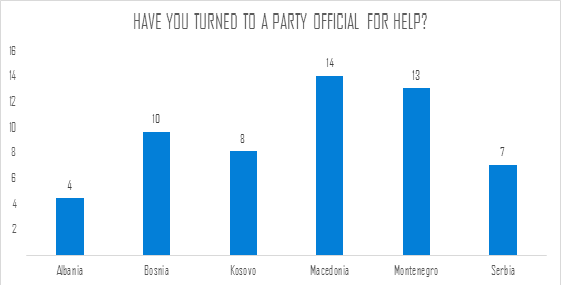 These findings suggest that clientelism is widely present in the Western Balkan societies, and seems to have a notable effect on the electoral outcomes. Political parties offer money and favours in exchange for votes, but citizens also turn to political parties for help when necessary. Citizens also consider employment to be often associated with the use of informal connections, providing gifts, favours and even bribery, and are sceptical about the presence of merit-based employment. The perceptions that clientelist practices are widespread suggest that citizens view them as the normal way things are done in the Western Balkan societies.

The report is part of the EU Horizon 2020 project ‘Closing the gap between formal and informal institutions in the Balkans’ (INFORM). The project is set to study interactions between formal and informal institutions in the Western Balkan societies in the fields of politics, economics and everyday life, to track the influence of these institutions on the implementation of EU rules and regulations and to produce original research and policy recommendations. It is implemented by an international consortium led by the School of Slavonic and East European Studies (SSEES) at the University College London (UCL).

The complete report is available on the following link:

The Informal Life of Political Parties in the Western Balkan Societies

Read more about the project INFORM