INFORM: Presentation of a scientific research on political clientеlism in the Balkans on a New York convention 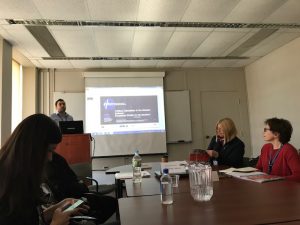 Borjan Gjuzelov, associate researcher at IDSCS, presented the initial findings of the study “Political clientelism in the Western Balkans: Perpetuum mobile for re-election?” on the 22nd Annual World Convention of the Association for the Study of Nationalities which took place in New York, USA from 4-6 May 2017. The research reviews clientelistic practices in the states of Western Balkans, Albania, Bosnia and Herzegovina, Montenegro, Kosovo, Macedonia, Serbia and Croatia, emphasizing the gap between the weak implementation of the formal legislation and the informal practices and expectations of the citizens. The research differentiates between electoral ad hoc clientelism based on one-time provision of goods in exchange for electoral support (i.e. vote-buying) and continuous relational clientelism based on long-term loyalty built on various forms of abuse of public goods for party interests (ex. partisan employments, abuse of public procurement, etc).

Gjuzelov is currently a PhD candidate in political science at Queen Mary University in London, United Kingdom, and collaborates with IDSCS as a researcher on the international scientific project INFORM “Closing the gap between formal and informal institutions in the Balkans”. His doctorate explores the evolution of informal institutions and “telephone justice” in Macedonia in the last three decade of the late Yugoslav socialism and the early transition to present day EU integration.

The research on political clientelism is conducted as part of the international scientific project INFORM, carried out in the framework of the scientific research and innovation program HORIZON 2020. 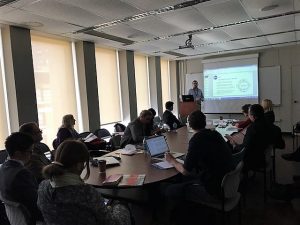 The Horizon 2020 project INFORM is carried out by more than 40 researchers from 9 partner organisations in 9 countries under the leadership of the School of Slavonic and East European Studies (SSEES) of University College London (UK). In addition to the Institute for Democracy “Societas Civilis” Skopje (Macedonia), the research work is implemented by the Institute for Ethnology and Folklore (Croatia), University of Maribor (Slovenia), Centre for Interdisciplinary Applied Social Research (Bosnia and Herzegovina), Centre for Empirical Cultural Studies of Southeast Europe (Serbia), Centre for Historical and Anthropological Research (Albania), Social Research Kosovo (Kosovo) and Riga Stradiņš University (Latvia).

Read more about the project INFORM:

INFORM: Presentation of a scientific research on political clientеlism in the Balkans on a New York convention