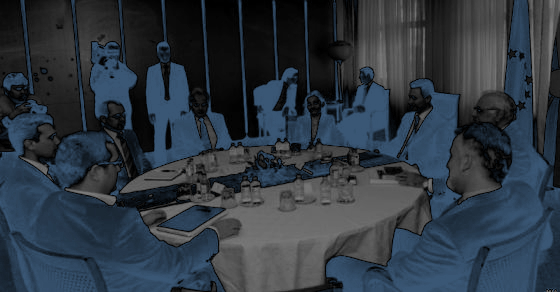 This analysis of “leaders’ meetings” (the practice of resolving substantive political disputes in private meetings between party leaders, thus circumventing legislative and other decision- making institutions) in four Balkan countries, demonstrate that the practice while efficient, suffer from an embedded transparency deficit. “Leaders’ meetings” take place behind closed doors, far away from the public eye, and with no consideration of citizens’ voices.

“Leaders’ meetings” have shifted the political decision-making from formal channels into informal ones. Ironically, “leaders’ meetings” are often employed by the very international actors that formally seek democracy, the rule of law and transparency.

In Southeast Europe, stalemates in the political decision-making and the fragility of formal political institutions have led to the development of an informal mechanism called “leaders’ meetings”. As an informal practice in the political domain, “leaders’ meetings” represent a point where formal processes fail to resolve a problem at stake and informal ones fill the void in an attempt to reach a solution. Intriguingly, however, often the leaders themselves are not directly involved in negotiating the various aspects of an issue at hand; rather, such points are discussed by negotiators. The negotiators act as “middle men,” consulting with the leaders throughout the negotiation process. Very often, external actors such as representatives of the European Union and the United States, or the president of a country are called to assume the negotiator role to ensure that agreements are honored.

Our case study explores “leaders’ meetings” as an (in)formal practice of negotiation and deliberation in times of political turmoil, which are often initiated and mediated by international actors who also shape their outcomes. “Leaders’ meetings,” we suggest, have served as a quick fix to larger political issues and crises of political hegemony. Focusing on Albania, Bosnia and Herzegovina, Kosovo, and Macedonia, the case study shows that (in)formality in politics is reworked through the interventions of the “international community”. 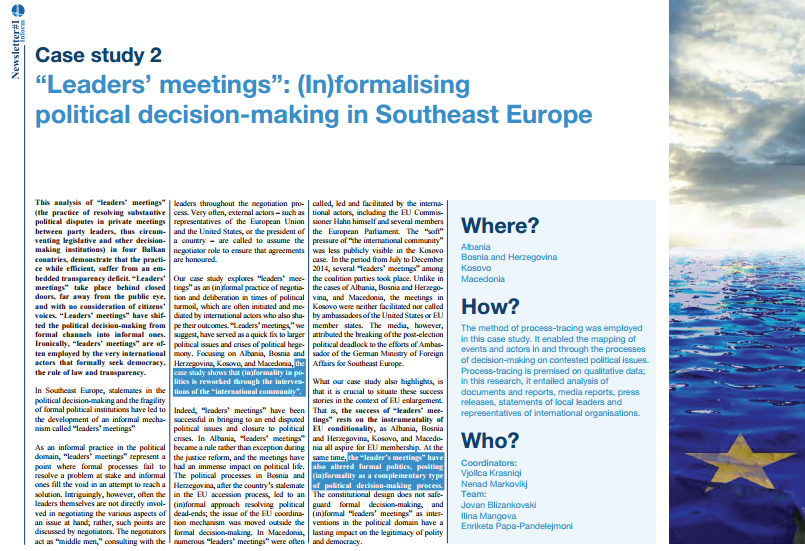 Indeed, “leaders’ meetings” have been successful in bringing to an end disputed political issues and closure to political crises. In Albania, “leaders’ meetings” became a rule rather than exception during the justice reform, and the meetings have had an immense impact on political life. The political processes in Bosnia and Herzegovina, after the country’s stalemate in the EU accession process, led to an (in)formal approach resolving political dead-ends; the issue of the EU coordination mechanism was moved outside the formal decision-making. In Macedonia, numerous “leaders’ meetings” were often called, led and facilitated by the international actors, including the EU Commissioner Hahn himself and several members the European Parliament.

The “soft” pressure of “the international community” was less publicly visible in the Kosovo case. In the period from July to December 2014, several “leaders’ meetings” among the coalition parties took place. Unlike in the cases of Albania, Bosnia and Herzegovina, and Macedonia, the meetings in Kosovo were neither facilitated nor called by ambassadors of the United States or EU member states. The media, however, attributed the breaking of the post-election political deadlock to the efforts of Ambassador of the German Ministry of Foreign Affairs for Southeast Europe.

What our case study also highlights, is that it is crucial to situate these success stories in the context of EU enlargement. That is, the success of “leaders’ meetings” rests on the instrumentality of EU conditionality, as Albania, Bosnia and Herzegovina, Kosovo, and Macedonia all aspire for EU membership. At the same time, the “leader’s meetings” have also altered formal politics, positing (in)formality as a complementary type of political decision-making process. The constitutional design does not safeguard formal decision-making, and (in)formal “leaders’ meetings” as interventions in the political domain have a lasting impact on the legitimacy of polity and democracy.

The complete INFORM Newsletter#1 is available on the following link:

Read more about the project: