Parliament: Word Cloud of the most Used Terms by the Representatives from June until November

By Jane Dimeski In : News
Home / News / Parliament: Word Cloud of the most Used Terms by the Representatives from June until November 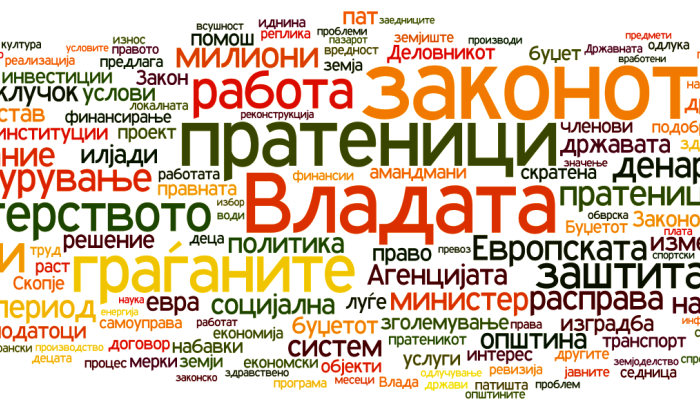 This is the word cloud of the most used words by the representatives in the parliamentary discussions in the period from June to November. The size of the words indicates how frequently they were used during 18 plenary sessions.

The cloud is made by entering the shorthand notes from the parliamentary services for the speeches held from the 5th to the 23rd plenary session, by using the application wordle.net. In addition, the words used in the parliamentary procedures were left out, so that we can get only those that truly reflect the topics discussed by the MPs.

The entire cloud in its original shape can be seen and downloaded on the following link.

The Institute for Democracy conducts monitoring on the quality of debate in the Parliament, within the project “Parliament Watch, Strengthening the Political Debate and the Deliberative Discourse”.

Every speech from the parliamentary sessions is analyzed by using the Discourse Quality Index.

Parliament: Word Cloud of the most Used Terms by the Representatives from June until November